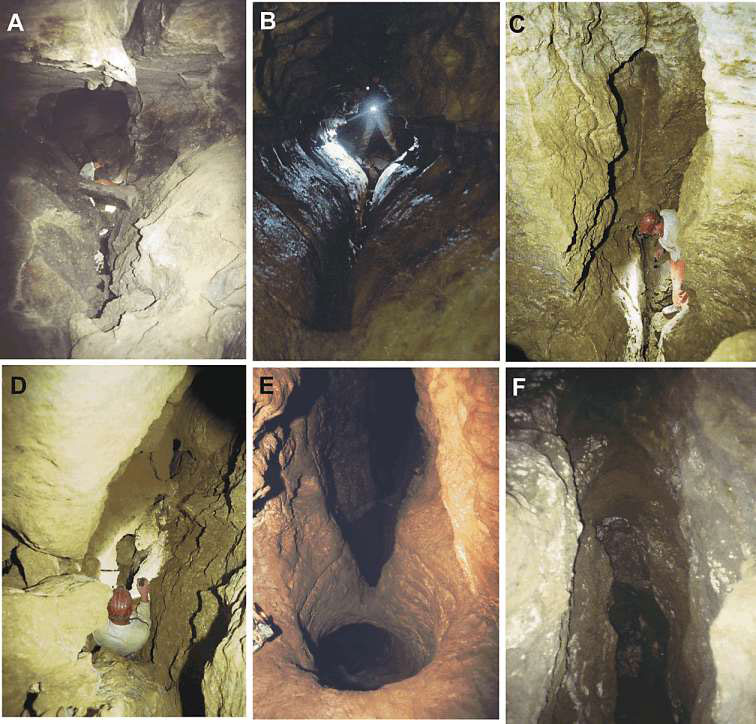 Abstract: Conceptual and respective quantitative models of speleogenesis/karstification developed for unconfined aquifers do not adequately represent speleogenesis in confined settings. A conceptual model for speleogenesis in confined settings is suggested, based on views about hydraulic continuity in artesian basins and close cross-formation communication between aquifers in multi-storey artesian systems. Soluble units sandwiched between insoluble porous/fissured formations (common aquifers) initially serve as low permeability beds separating aquifers in a confined system. Conduits evolve as result of vertical hydraulic communication between aquifers across the soluble bed ("transverse speleogenesis"). Recharge from the adjacent aquifer is dispersed and uniform, and flow paths across the soluble bed are rather short. There is a specific hydrogeologic mechanism inherent in artesian transverse speleogenesis (restricted input/output) that suppresses the positive flow-dissolution feedback and hence speleogenetic competition in fissure networks, and accounts for the development of more pervasive channelling in confined settings, of maze patterns where appropriate structural prerequisites exist. This is the fundamental cause for the distinctions between cave morphologies evolving in unconfined and confined aquifers and for eventual distinctions of karstic permeability, storage characteristics and flow system behaviour between the two types of aquifers.

Recognition of the differences between origin, organisation and behaviour of karst systems evolved in unconfined and confined settings can improve efficiency of exploration and management of various resources in karst regions and adequacy of assessment of karst-related hazards.

Read more: Conceptualisation of speleogenesis in multi-storey artesian systems: a model of transverse...

Abstract: Speleogenesis in confined settings generates cave morphologies that differ much from those formed in unconfined settings. Caves developed in unconfined settings are characterised by broadly dendritic patterns of channels due to highly competing development. In contrast, caves originated under confined conditions tend to form two- or three-dimensional mazes with densely packed conduits. This paper illustrates variations of solution (channel) porosity resulted from speleogenesis in unconfined and confined settings by the analysis of morphometric parameters of typical cave patterns. Two samples of typical cave systems formed in the respective settings are compared. The sample that represents unconfined speleogenesis consists of solely limestone caves, whereas gypsum caves of this type tend to be less dendritic. The sample that represents confined speleogenesis consists of both limestone and gypsum maze caves. The comparison shows considerable differences in average values of some parameters between the settings. Passage network density (the ratio of the cave length to the area of the cave field, km/km2) is one order of magnitude greater in confined settings than in unconfined (average 167.3 km/km2 versus 16.6 km/km2). Similarly, an order of magnitude difference is observed in cave porosity (a fraction of the volume of a cave block, occupied by mapped cavities; 5.0 % versus 0.4 %). This illustrates that storage in maturely karstified confined aquifers is generally much greater than in unconfined. The average areal coverage (a fraction of the area of the cave field occupied by passages in a plan view) is about 5 times greater in confined settings than in unconfined (29.7 % versus 6.4 %). This indicates that conduit permeability in confined aquifers is appreciably easier to target with drilling than the widely spaced conduits in unconfined aquifers. 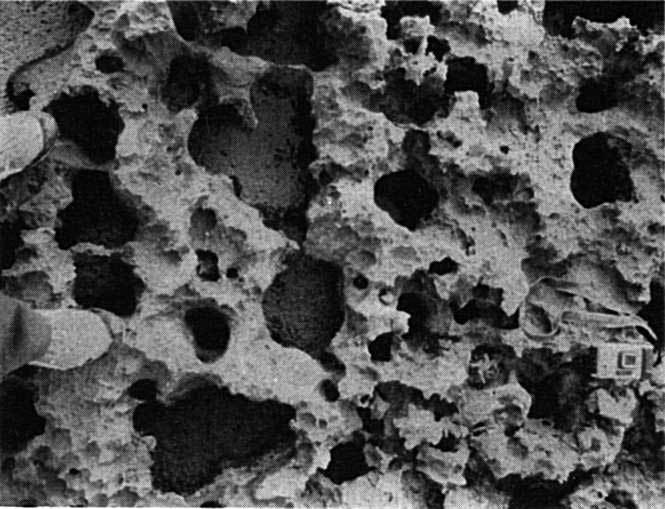 Abstract: Karst development on carbonate platforms occurs continuously on emergent portions of the platform. Surficial karst processes produce an irregular pitted and etched surface, or epikarst. The karst surface becomes mantled with soil, which may eventually result in the production of a resistant micritic paleosol. The epikarst transmits surface water into vadose pit caves, which in turn deliver their water to a diffuse-flow aquifer. These pit caves form within a 100,000 yr time frame. On islands with a relatively thin carbonate cover over insoluble rock, vadose flow perched at the contact of carbonate rock with insoluble rock results in the lateral growth of vadose voids along the contact, creating large collapse chambers that may later stope to the surface.

Carbonate islands record successive sequences of paleosols (platform emergence) and carbonate sedimentation (platform submergence). The appropriate interpretation of paleosols as past exposure surfaces is difficult, because carbonate deposition is not distributed uniformly, paleosol material is commonly transported into vadose and phreatic voids at depth, and micritized horizons similar in appearance to paleosols can develop within existing carbonates.
On carbonate islands, large dissolution voids called flank margin caves form preferentially in the discharging margin of the freshwater lens from the effects that result from fresh-water/salt-water mixing. Similarly, smaller dissolution voids also develop at the top of the lens where vadose and phreatic fresh-waters mix. Independent of fluid mixing, oxidation of organic carbon and oxidation/reduction reactions involving sulfur can produce acids that play an important role in phreatic dissolution. This enhanced dissolution can produce caves in fresh-water lenses of very small size in less than 15,000 yr. Because dissolution voids develop at discrete horizons, they provide evidence of past sea-level positions. The glacio-eustatic sea-level changes of the Quaternary have overprinted the dissolutional record of many carbonate islands with multiple episodes of vadose, fresh-water phreatic, mixing zone, and marine phreatic conditions. This record is further complicated by collapse of caves, which produces upwardly prograding voids whose current position does not correlate with past sea level positions.

The location and type of porosity development on emergent carbonate platforms depends on the degree of platform exposure, climate, carbonate lithology, and rate of sea-level change. Slow, steady, partial transgression or regression will result in migration of the site of phreatic void production as the fresh-water lens changes elevation and moves laterally in response to sea-level change. The result can be a continuum of voids that may later lead to development solution-collapse breccias over an extended area.

Carbonate platforms have become emergent throughout earth history. Karst development on such emergent platforms is a very rapid geological process. Emergent carbonate platforms are likely to develop karst over a broad area and through a significant thickness. Why is paleokarst, as described in this paper, not more common in the geologic record? Do we fail to recognize the evidence, or are these karst features vulnerable to subsequent erosion and alteration that eliminates them? The major purpose of this paper is to motivate others to re-examine ancient carbonates in light of our understanding of karst processes.
For the purposes of this paper, carbonate platforms in the oceanic realm, as defined by Smart and Whitaker (1991, 1993), will be the model used to describe carbonate island karst development. Smart and Whitaker (1991, 1993) define the oceanic realm as that in which carbonates are diagenetically immature, sea-level fluctuations are of low order, and continental influences are absent. The focus of this paper is on the effects of recharge, climate, degree of platform exposure, lithology, and rate of sea-level change upon carbonate platforms and karst development, using Quaternary carbonate settings as examples. The various hydrological environments found in oceanic carbonate islands are illustrated in Fig.1.

Conduit fragmentation, cave patterns, and the localization of karst ground water basins: the Appalachians as a test case

Abstract Because conduit systems in maturely developed karst aquifers have a low hydraulic resistance, aquifers drain easily and karst aquifers are subdivided into well-defined ground water basins. Ground water elevations are highest at basin boundaries; lowest at the spring where the ground water is discharged. Parameters that control the type of conduit development are (1) the effective hydraulic gradient, (2) the focus of the drainage basin, and (3) the karstifiability of the bedrock. Moderate to highly effective hydraulic gradients permit the runaway process that leads to single conduit caves and well ordered branchwork systems. Low hydraulic gradients allow many alternate flow paths and thus a large degree of fuzziness in the basin boundaries. Low gradient ground water basins also tend to merge due to rising water tables during periods of high discharge. Focus is provided by geological constraints that optimize discharge at specific locations that can evolve into karst springs. Karstifiability is a measure of the bulk rate at which aquifer rocks will dissolve. Fine grained, pure limestones and shaley dolomites mark the opposite ends of the range. The cave surveys of the Appalachian Highlands provide a data base that can be used to classify the lateral arrangements of conduit systems and thus determine the relative importance of the factors defined above.

Relatively narrow and deep vertical caverns, which developed in the epikarst and vadose zones of karst plateaus with no known accessible connection to active horizontal caves, are considered here to be plateau karst shafts. Until now, the origin of such caverns has not been well understood and has been the subject of conflicting opinions (Baron, 1998, 2001, 2002; Baron and Fiala, 1999; Hradecky et al., 1974; Kosa, 1971; Lesinsky , 1998; Lysenko et al., 1974; Muller and Sarvary, 1971; Skrivanek, 1958, 1965).

This paper attempts to explain the more important factors of their speleogenesis and outlines the main stages of shaft evolution, adding the author's observations to older information. This research took place at the Dolny Vrch Plateau, in the Slovak Karst Protected Area in southeastern Slovakia (Fig.l), as part of a systematic 35-year speleological study of the plateau by Czech and Slovak cavers and karstologists.