Karst breakdown mechanisms from observations in the gypsum caves of the Western Ukraine: Implications for subsidence hazard assessment

Abstract: The term karst breakdown is employed in this paper to denote the totality of processes and phenomena of gravitational and/or hydrodynamic destruction of the ceiling of a karst cavity and of the overlying sediments. It refers not only to the existence of a surface subsidence (collapse) feature but, first of all, to the "internal" (hidden in the subsurface) structures that precede development of a surface form.
This study reports and discusses the results of direct mapping and examination of breakdown structures in the gypsum karst of the Western Ukraine, at the level of their origin, i.e. in caves. The accessibility of numerous laterally extensive maze cave systems in the region provided an excellent opportunity for such an approach, which made it possible to examine the relationship between breakdown structures and particular morphogenetic or geological features in caves, and to reveal stages of breakdown development.
It is found that breakdown is initiated mainly at specific speleogenetically or geologically "weakened" localities, which classify into a few distinct types. The most of breakdowns, which are potent to propagate through the overburden, relate with the outlet cupolas/domepits that represent places where water had discharged out of a cave to the upper aquifer during the period of transverse artesian speleogenesis. Distribution of breakdown structures does not correlate particularly well with the size of the master passages. Several distinct mechanisms of breakdown development are revealed, and most of them proceed in several stages. They are guided by speleogenetic, geological and hydrogeological factors.
The study confirms that a speleogenetic approach is indispensable to the understanding of breakdown pre-requisites and mechanisms, as well as for eventual subsidence hazard assessment. Direct observations in caves, aimed both at speleogenetic investigation and breakdown characterization on regional or site-specific levels, should be employed wherever possible.

Read more: Karst breakdown mechanisms from observations in the gypsum caves of the Western Ukraine:... 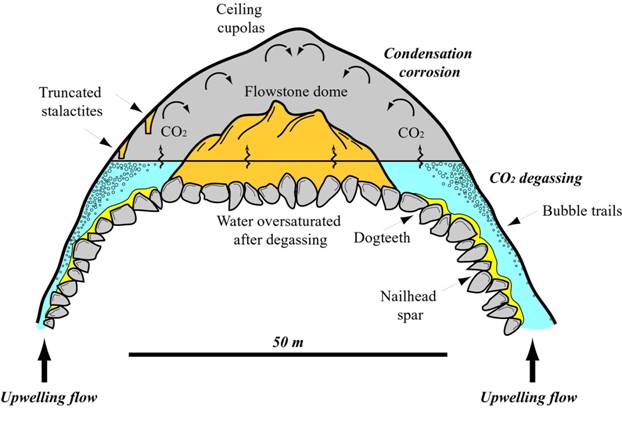 Abstract: Two dry caves from French Provence (Adaouste and Champignons caves) were until now considered as “normal” caves, evolved under meteoric water flow conditions. A new approach gives evidence of a hypogenic origin from deep water uprising under artesian conditions. Specific morphologies and sediments associated with this hydrology are discussed.

Most explored cave systems have evolved under seeping meteoric water carrying biogenic CO2 under gravity flow, torrential type in the vadose zone or under hydraulic charge in the phreatic zone (Ford and William, 1988). Except for pseudokarsts resulting in processes other than solution, few minorities of cave systems find their origin in artesian and hydrothermal settings. Other factors of aggressiveness can be substituted to biogenic CO2, like endogenous CO2 linked to magmatic degassing, or H2SO4 stemming from sulphide oxidation of evaporites or hydrocarbon at depth. These are known as hypogenic caves. Hypogenic karst results from a source of aggressiveness produced at depth (CO2 or H2S) and is linked to confined or rising flow, without the direct influence of surface recharge. It corresponds approximately to artesian flow, where hydrothermalism is a variant (Klimchouk, 2000; Palmer, 2000). The sources of aggressiveness, although well localised, produce an enhanced solution resulting sometimes in enormous voids.

Corrosion and sedimentation gravific cave forms are in general well known from long term studies throughout the world (White, 2000). Hypogenic caves can go unnoticed if they are misleadingly attributed to a classic formation process, particularly in France where these phenomena are rare. The two examples shown here highlight sedimentation and corrosion forms, which do not result from gravific seeping (Forti, 1997; Dublyansky, 1997, 2000).

Abstract: Streams that drain from non karstic surfaces tend to have great discharge fluctuations and low concentrations of dissolved solids. Where these streams encounter karstic rocks they can form caves with hydraulic and chemical dynamics quite different from those fed by autogenic recharge (e.g. through dolines). In either case, caves form only along those paths in which the discharge can increase with time. Only a few favorable paths achieve this goal, while the others stagnate with small and diminishing enlargement rates. Caves in carbonate rocks that are fed by allogenic streams have a relatively short inception period, after which the mean annual rate of dissolutional wall retreat is typically about 0.01 cm/yr. Most of the annual growth takes place during a few major floods that occupy only a small fraction of the year. Local growth rates can be enhanced by abrasion from sediment.

During floods, highly aggressive water is delivered rapidly to points deep within the karst aquifer. As flood discharge increases, cave streams become ponded by constrictions caused by detrital sediment, insoluble beds, or collapse material. The head loss across a constriction varies with the fifth power of the diameter ratio under pipe full conditions. Head loss also increases with the square of the discharge. Because the discharge during a flood rises by several orders of magnitude, the head loss across constrictions can increase enormously, causing water to fill parts of the cave under considerable pressure. This highly aggressive water is injected into all available openings in the surrounding bedrock, enlarging them at a rapid and nearly uniform rate. Depending on the structural nature of the bedrock, a dense array of blind fissures, pockets, anastomoses, or spongework is formed. Many such caves develop traversable mazes that serve either as bypass routes around constrictions, or as "karst annexes", which store and later release floodwaters. Many features that are sometimes attributed to slow phreatic flow or mixing corrosion are actually generated by ponded floodwaters. In caves that experience severe flooding, adjacent fissures or bypass routes with initial widths at least 0.01 cm can grow to traversable size within 10,000 years.

The genesis of the Tennengebirge karst and caves (Salzburg, Austria) 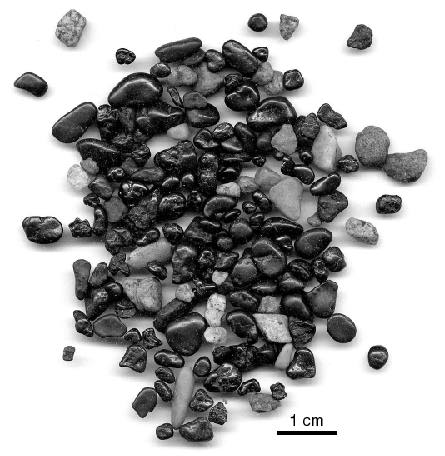 Abstract: Research has been carried out in the Tennengebirge Massif (Salzburg, Austria) with specific attention to karst morphology, cave systems, and sediments. This study reveals the genesis of the karst and the underground systems of the Tennengebirge, since the Oligocene. Large horizontal systems, which date back to the Miocene, were studied through the example of the caves Hornhohle and Eisriesenwelt, which respectively represent Ruinenhohlen (“cave ruins”) and Riesenhohlen (“giant caves”). The Cosa-Nostra - Bergerhohle System is typical of a mostly vertical large high-relief, alpine cave. The main characteristic of this network is major development in the vadose zone. The shafts' morphology is in “stairs beneath a faulted roof.” At greater depth, they connect to a perched epiphreatic zone, which is typical of a dammed karst. The main underground sediments are of paleoclimatic and hydrodynamic significance, corresponding to hot, stable, or unstable environments (flowstones, reworked weathered rocks) and cold environments (carbonate varves, glacial pebbles). A preliminary study of the Tennengebirge sediments reveals significant information about its evolution throughout Pliocene-Quaternary time.

Read more: The genesis of the Tennengebirge karst and caves (Salzburg, Austria)

Department of Earth Sciences, State University of New York Oneonta. NY 13820-4015, USA.
E-mail: This email address is being protected from spambots. You need JavaScript enabled to view it.

Abstract: This paper reviews the hydrochemical processes that determine the patterns of caves and other solutional features within carbonate rocks. The model presented relies on the functional relationships expressed by chemical mass balances, flow equations, and kinetic expressions for dissolution rate. Although it shares many aspects of purely conceptual models and is backed by field evidence, its quantitative basis places it into the realm of analytical models.
The conclusions merely summarize earlier work (mainly Palmer, 1981, 1991. Solutional enlargement of caves and other karst features is highly selective in water that is close to equilibrium with dissolved carbonate minerals, enlarging only the most favorable openings – i.e. those that transmit the greatest discharge. This is characteristic of long flow paths within a typical karst aquifer. In contrast, solutional enlargement will be rather uniform along many competing flow paths where there is (1) high discharge, (2) sustained steep hydraulic gradients, (3) short flow paths, or (4) local renewal of aggressiveness by mixing, oxidation of sulfides, etc. These conditions produce maze caves and epikarstic networks. In general, this condition prevails if Q/rL > 0.001 cm/sec (tubes), or /bL > 0.001 cm/sec (fissures), where Q = discharge, r = tube radius, b = long dimension of fissure cross section, and L = distance of flow from where the initial aggressive solution comes in contact with the carbonate rock.

The 16th Sinkhole Conference: Register and Help the People of Puerto Rico!

in Miscellaneous by Super User
As written at the top of this news message, our friends in Puerto Rico have told us that the best way you can help the people of the island recover is go to Puerto Rico. We hope you register for the Sinkhole Conference, not simply because we believe it will be a great experience for you, but also because we truly believe it will help these people who have suffered greatly from natural tragedies over the past few years. If you register now and wish to give a presentation, you still have the opportunity. Sign up for Karst Clips, a lightning talk-style session where you can update everyone on…

Call for the 2020 EuroSpeleo Protection Label

in Miscellaneous by News Manager
Dear Caving Friends, The European Speleological Federation (FSE) and its European Cave Protection Commission (ECPC) is very pleased to announce the launching of the 2020 Call for the EuroSpeleo Protection Label. Please find enclosed the application form (deadline for applications 15 June 2020). You can also find the application form on the FSE website: http://www.eurospeleo.eu/en/commissions-en/cave-protection/ecpc-activities/eurospeleo-protection-label.html The aim of the EuroSpeleo Protection Label is to support active cave protection in the speleo clubs, committees, national commissions,…

in Miscellaneous by News Manager
The France HABE Prize is awarded by the Department of Karst and the Cave Protection of the International Union of Speleology (UIS).Its purpose is to promote the protection of karst and caves for generations to come. Their natural legacy are proven sources of increasingly rich information about the history of our planet and humanity, enabling people to act more thoughtfully, efficiently, and sustainably for the future of our environment. The prize is named in memory and honor of Dr. France HABE (…10/12/1999) of Slovenia (Yugoslavia), who among his other many accomplishments served as President…