Trace elements in speleothems: a short review of the state of the art 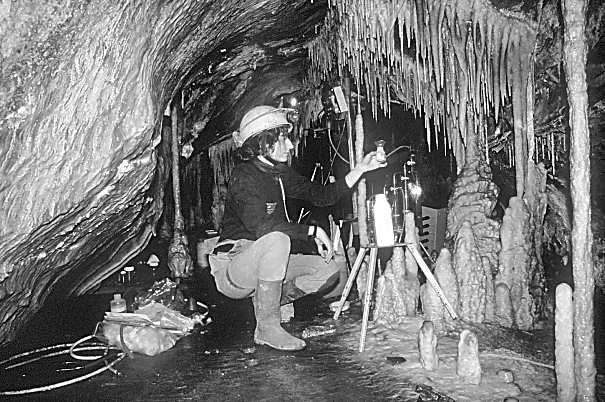 Abstract: A state of the art of the research on trace elements of speleothems is given. First studies focussed on problems such as the colour of speleothems and the aragonite problem. In-situ studies and studies oriented towards a better understanding of vadose hydrology brought new insights in the controls on trace elemental composition of speleothems. Recent studies deal with microscale analyses and annual and intra-annual chemistry changes. Further in-situ studies should be performed to further differentiate influences, such as climate, soil/weathering and local hydrology in order to better constrain possible transfer functions between the surface and a speleothem.

The colour of speleothems

First studies on trace elements in speleothems (James, 1997 and references herein) focused mainly on possible explanations for the colour of speleothems (White, 1997 and references herein). A particular coloration of a speleothem may be due to the presence of certain minor and/or trace constituents. However, there is no direct relationship between trace element content and colour, and moreover other substances such as organic acids can also colour speleothems (Gascoyne, 1977). Genty showed that the visible distinction between white and dark layers in a laminated speleothem from the Godarville speleothem is due to a difference in porosity with a much higher porosity for the white layers (Genty, 1992; Genty et al., 1997) (Fig.═1).

Fig. 1. Cross section of a 30-years old stalagmite (5═cm high) of the Godarville tunnel (Belgium). It is annually laminated with an alternation of dark translucent compact and white porous layers.

The calcite-aragonite problem was another main topic in the first trace element studies in speleothems (Hill and Forti, 1997 and references herein). At low temperatures, inorganic aragonite is a meta-stable form of calcium carbonate. Nevertheless primary precipitated aragonite is found in the cave environment. This is explained by a high Mg/Ca ratio of the precipitating solution, i.e. the cave water, with an additional influence of the saturation state, the speleothem surface and the CO2 content of the cave water and air (Holland et al., 1964; Given and Wilkinson, 1985; Hill and Forti, 1997 and references herein).

With the availability of precise analytical techniques and with the increasing interest in the climatic and environmental topics, the number of geochemical studies in the cave environment increased. The first important study of the chemical composition of cave waters was done by Holland et al. (1964) with the determination of the partition coefficient of Sr between cave waters and cave calcite in the Luray Caverns in Virginia (North-America). They found that partition coefficients for Sr calculated from the Sr content of cave waters and deposits in the Luray Caverns in Virginia were in good agreement with DSr of 0.14 determined in the laboratory. Recently Huang and Fairchild (2001) obtained new values for DSr and DMg during a karst-analogue calcite deposition experiment in order to study the different controls on the Mg and Sr incorporation of a speleothem. In a broad study of Carlsbad Cavern (N-America) cave waters and calcites, Gonzales and Lohmann (1988) found a large variability of cave waters compositions due to degassing, evaporation and carbonate precipitation processes. The enrichment of Soreq cave waters (Israel) in Mg2+ was explained by Bar-Matthews et al. (1991) as due to prior low-Mg calcite precipitation from the cave waters, which are consequently enriched in Mg2+. Prior calcite precipitation was also observed in the PХre NoКl cave (Belgium) (Fig.2) (Verheyden et al., 2000) and in the Clamouse cave (S-France) by Fairchild et al. (2000) who demonstrated that it is a powerful mechanism for generating enhanced and covarying Mg/Ca and Sr/Ca ratios. Anti-correlation between annual Mg/Ca and Sr/Ca cycles in speleothems was also observed and explained by Roberts et al. (1998) and Fairchild et al. (2000) as due to incongruent dolomite dissolution. The seasonal changes are probably due to variations in the water residence time in the vadose zone, linked to changes in amount of precipitation. These studies demonstrated that the changes in chemistry of cave waters, and consequently in speleothems, could reflect changes in effective precipitation (or recharge) (Roberts et al., 1998; Fairchild et al., 1999, 2000; Verheyden et al., 2000). Incongruent dolomite dissolution was also demonstrated to be responsible for the anti-correlation between Mg and Sr content and between Ba and Mg content in a New Zealand flowstone by Hellstrom et al. (2000). Changes in the contribution of weathering linked with changes in rainfall intensity were invoked to explain changes in the Sr, Ba and U contents of speleothems by Bar-Matthews et al. (1999) and Ayalon et al. (1999). During colder and dryer periods, higher trace element concentrations reflect an increase in exogenic sources (sea spray and Aeolian dusts), and a reduced contribution of weathering from the host dolomites.

Fig. 2. In-situ measurement and sampling in the PХre NoКl cave.

The study by Bottrell and Atkinson (1992) of seepage water and tracing in a karstic limestone in Yorkshire, England, revealed complex flow patterns of the seepage water with different residence times depending on the flow route of the waters. Perrin (1997) observed, as expected, an increase of the ion concentration of cave waters with increasing cave depth, reflecting the increase in water-rock interaction time. He observed a lower ion concentration in more slowly dripping waters in the "rИseau du grand Cor" (Valais, Switzerland) and suggested that a distinction must be made between slow and fast dripping cave waters. In shallow caves, fast-dripping places may record heavy rainfall periods by an increase in the drip rate and a negative peak in conductivity, with a response of a few hours, while slow-dripping places do not (Borsato, 1997). These observations are in agreement with the studies of Perrette (1999), Destombes et al. (1997) and Delannoy et al. (1999). These authors model the hierarchisation of the drainage system and make the distinction between a transmissive system or vertical water flow through fractures, and a capacitive system or the water reservoir contained in the microfractures. Different information will be registered in stalagmites deposited by seepage water coming through the different systems. These studies demonstrate the importance of the flow route and residence time of the vadose water. However, processes going on at the surface above the cave can also influence the chemical composition of the cave waters and as a consequence of the speleothems. Goede 1994 and Goede et al., 1998 explained the bimodal distribution of the Sr content of a Tasmanian stalagmite deposited between 80 and 60 alpha-U/Th year BP as due to rapid changes in the Sr contribution of dominant strong winds inducing variations in the Sr contribution derived from terrestrial dust deposited at the surface above the cave.

Since Mg incorporation in calcite is temperature dependent, Gascoyne (1983, 1992) stated that changes in the Mg content of a speleothem can be used to reconstruct air surface temperature changes, since in most shallow caves, the calcite precipitation temperature or cave temperature is an annual mean of the surface air temperature. By measuring the Mg content of cave seepage waters and associated calcite deposits in caves from Vancouver Island and Jamaica, he found average partition coefficients for Mg in calcite of 0.017 (Vancouver Island, 7╟C) and 0.045 (Jamaica, 23╟C). He calculated that a 1╟C increase would increase the Mg content of the stalagmite with 7%. A positive trend in Mg/Sr content (as well as a negative trend in Br content) in a Late Glacial Tasmanian speleothem was believed to be temperature related by Goede and Vogel (1991). However, Goede (1994) found no correlation between Mg content and d18O time-series in a Tasmanian stalagmite deposited between 98 and 55═ka═BP. Recent studies link Mg changes more probably to changes in the water residence time.

Roberts et al. (1999) bring some serious doubts about whether trace element changes in speleothems may reflect palaeo-environmental changes. They measured Mg, Sr and Ba concentration changes in three coeval stalagmites from a cave in Great-Britain based on LA-ICP-MS and found no coherence between records from the different stalagmites. The Mg/Sr curves for the three speleothems demonstrated that variations in this variable couldn't have been produced by temperature changes. Their model suggests a strong control of hydrological mixing of waters in the epikarstic zone, which have interacted with two geochemically distinct source rocks (calcitic limestone and dolomite). Therefore it is possible that climatic signals were overruled by other forcings due to the particular geological setting.
Annual cyclicity and future studies

Recent results focus on the microscale analysis possible by new, more sophisticated and high-resolution techniques, to try to understand annual and intra-annual changes in speleothem chemistry. Annual cyclicity gives the possibility to determine the growth rate of the speleothem and in some cases to date a speleothem by cycle counting in the absence of visible laminae. It is now clear that minor and trace elements (Sr, Mg, F, P, Na, Fe, Zn, Si) display an annual cyclicity in laminated calcite speleothems (Fairchild et al., 2001; Huang et al., 2001; Kuczumow et al., 2003) and probably also in aragonitic speleothems (Ba/Ca) Finch et al. (2001). But trace elements in speleothems give much more information than only growth parameters. It becomes clear that the main climatic control on these trace elements in speleothems is the water availability, i.e. the effective rainfall or recharge with an increase of the Me2+/Ca ratios in dryer periods. Growth rate effects seem to be important for Sr and Na. Phosphor is directly linked with the vegetation productivity and decay. Huang et al. (2001) suggested an increase in P in autumn, aided by the high water infiltration rates, also common in autumn in temperate regions. P could therefore be useful as an annual marker in the absence of visible laminae.
Further studies should focus on two particular fields: i) in-situ studies on the nowadays functioning and═ ii) general microscale trace element studies in speleothem calcite, given its particular growth. In-situ studies with monitoring of local climatic cave conditions and analyses on cave seepage waters give a view on the transfer functions of elements, the relation between the surface (climate, vegetation), the geology (host rock, hydrological patterns) and local cave climatology (evaporation, PCO2, etc.). It gives understanding in the sub-annual variations of trace elements in the cave waters, which can be compared to variations in trace element content and variations in modern deposits. Especially, the knowledge of the partitioning between water and calcite at low elemental concentrations and the controls on the partitioning (water saturation and cave air PCO2 for example), would be useful to predict the trace element behaviour in the speleothem. In parallel, the data obtained in modern deposits should be compared to available meteorological and historical data to further study the link with climate and to establish a reliable base for palaeoclimatic studies. It is clear that a small candle shaped stalagmite continuously fed by a constant drip rate will not give the same paleoclimatic information through its trace element content then a big “shower” fed stalagmite with variable drip rates, directly linked with surface precipitation. Local arrangement should therefore always be taken into account, since they would enable the making of a kind of guide to sample a speleothem in relation with the wished climatic information, also useful regarding of course the preservation problems of speleothems.