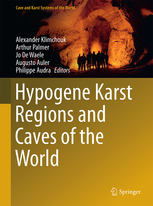 The book “Hypogene Karst Regions and Caves of the World” is a project, initiated and coordinated by the Commission on Karst Hydrogeology and Speleogenesis of the International Union of Speleology, as a part of its ongoing HypoKarst project ("Hypogene Karst & Speleogenesis: Nature, Processes, Mechanisms, Manifestations and Applications"). This book is going to be published by Springer, in its series “Cave and Karst Systems of the World”.

The progress in regional studies has been previously reviewed in a series of conferences and their subsequent publications, such as “Advances in Hypogene Karst Studies” (edited by K. Stafford, L. Land, and G. Veni, 2009), “Hypogene Speleogenesis and Karst Hydrogeology of Artesian Basins” (edited by A. Klimchouk and D. Ford, 2009), “Hypogene Cave Morphologies” (edited by A. Klimchouk, I. Sasowsky, J. Mylroie, S.A. Engel, and A.S. Engel, 2014), and “DeepKarst 2016: Origins, resources, and management of hypogene karst” (edited by T. Chaves and P. Reehling, 2016).

The new book was proposed as a next step in consolidating the quickly growing wealth of regional data about hypogene karst. It is neither an inventory, nor a comprehensive coverage of all hypogene karst regions and caves of the world, but is rather a selection of regional and cave-specific case studies that represent a remarkable variability of relevant patterns and settings (geological, hydrogeological, tectonic and geodynamic). In this way, it provides a solid reference for further generalizing and modeling studies of the topic, which may be the focus of a future collaborative volume on hypogene karst.

The book contains 61 chapters authored by 131 scholars from 25 nations and all continents (see the Table of Contents below). It starts with a chapter that reviews basic concepts about hypogene karst, speleogenesis, fluid dynamics, and hydrodynamic zoning of the upper crust, and outlines a pattern for classifying hypogene karst and its settings. Specific case studies are organized into four large geographic regions or continents. Although coverage is truly global, it is not uniform. Whereas 25 chapters are concerned with regions in Europe and 24 chapters deal with the North American regions, only 11 concern other parts of the world. This reflects the uneven distribution of research rather than scarcity of hypogene karst in underrepresented regions. On the basis of geological characteristics and fragmented reports of features scattered throughout petroleum and mining publications, it is evident that hypogene karst is widespread in many regions of Africa, Asia, Australia and South America, although there are few focused studies. Moreover, even in Europe and North America many areas have been recognized only recently to host hypogene karst, and its study is still ongoing. This means that next editions of volumes under this title will be needed.

Most contributions in this book deal with karst systems accessible to direct examination, which presently occur in the shallow subsurface. Most are relict systems, decoupled from their original genetic environments and brought into the shallow subsurface from considerable, sometimes large, depth. The advantages of direct observations and sampling, and of using methods developed in karst and cave science, make it possible to obtain unique information about patterns, processes, conditions, and controls of the origin of void-conduit systems at depth and about their hydraulic function. Many parameters of cave-forming environments can be reconstructed from mineralogical and geochemical footprints or inferred from other considerations, such as paleo-hydrogeological analysis. Studies of features that are analogs of deep-seated void-conduit systems are indispensable for interpreting data from drilling and geophysical surveys and for the development of conceptual models. Unfortunately, a wealth of information about the topic in mining areas and petroleum fields is difficult to obtain by karst scholars. Bridging the gap between karst science and industrial geology is a promising opportunity for further developments in hypogene karst studies.

The conference “DeepKarst 2016” held in April earlier this year in Carlsbad, NM, organized and hosted by the National Cave and Karst Research Institute (NCKRI), has played an important role in the preparation of this book. Our special thanks to Margaret Palmer for her invaluable help in editing the chapters on North America. The editors thank all contributing authors for their productive collaboration, as well as the many researchers and cave explorers who have documented caves and karst features in various parts of the world.

The editors hope that this book will stimulate further research into hypogene karst and caves around the globe, as well as the interaction between karst scientists and industrial geologists.

Hypogene Karst Regions and Caves of the World

1 Klimchouk A Types and settings of hypogene karst

23 Klimchouk A, Andreychouk V Gypsum karst in the south-west outskirts of the Eastern-European platform (Western Ukraine): a type region of artesian transverse speleogenesis

26 Kadebskaya OI, Maksimovich NG The role of hypogene speleogenesis in the formation of the Ordinskaya cave, fore-Urals, Russia

28 Frumkin A, Langford B, Porat R The Judean Desert - the major hypogene cave region of the southern Levant

38 Palmer A Hypogenic vs. epigenic aspects of the Black Hills caves, South Dakota

42 Blackwood KW, Development and distribution of hypogenic caves and paleokarst features in the Arbuckle Mountains of South Central Oklahoma

55 Auler AS Hypogene caves and karst of South America

60 Stratford D A review of the geomorphological context and stratigraphy of the Sterkfontein Caves, South Africa