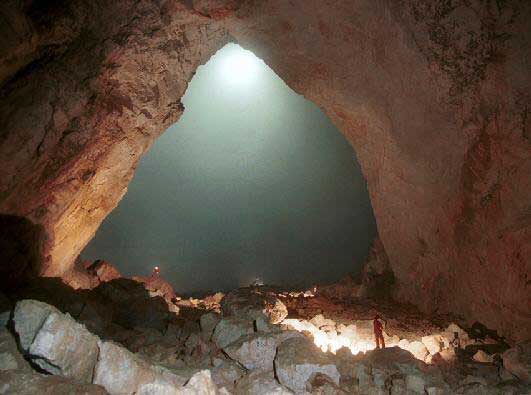 Abstract: In the karsts of China and Mulu (Sarawak) large chambers and tiankengs are associated with much smaller cave passages. They have developed mainly on fracture zones, some within the phreas, where rock collapse is not associated only with vadose drainage.

Southeastern Asia contains many of the largest caves in the world, including the huge maze passages in the Gunung Mulu National Park in Sarawak, and the many enormous linear passages in southern China. From many personal visits to these caves, a few observations may be pertinent to the debate on the origins of tiankengs.

A notable feature of the caves in both China and Mulu is the number of unusually large collapse chambers, some reaching all the way to the ground surface. It is significant that many of these abnormally large collapse chambers are associated with comparatively small horizontal passages. Sarawak Chamber, in the Gunung Mulu National Park of Sarawak, is the world's largest cave chamber, over 300 m wide (Fig. 1), but the cave passages both in and out of it are mostly less than about 10 m wide. In Guangxi, the Dashiwei Tiankeng, one of the largest in the world, is 400 m wide, while the river passage that drains out of it is only about 30 m wide. Nearby, the 20 km of river passages in the Leye River Cave System are mostly of similar size (Fig. 2), except where they break out into seven large chambers, each about 100 m wide. Two of these have collapsed to create the Dacao and Baidong Tiankengs, and another has only the small surface breach of Maoqi Dong. 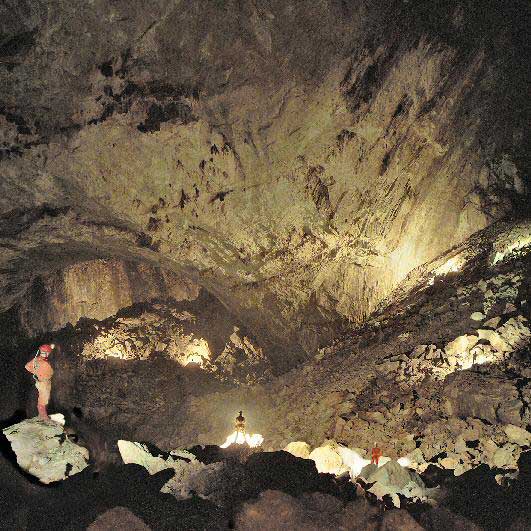 Fig. 1. Sarawak Chamber in the Mulu karst of Sarawak, with elements of arch structures within parts of its roof (Photo: Jerry Wooldridge).

Fig. 2. The main passage in Bai Dong, in Guangxi, with daylight pouring in through the Funnel of Light (Maoqi Dong).

Cavers' persistent enthusiasm to discover new passages has pushed the limits of exploration into ever deeper flooded zones, through ever smaller passages, and up ever higher rock walls. In pursuit of new discoveries in high-level passages, climbing techniques have been developed, using battery-powered electric drills to construct bolt ladders up the clean walls of massive underground shafts. It is noticeable that the tops of various of these are completely blind, with no open entry passage from above. In Benerat Caverns, in Mulu, Sarawak, two massive avens (shafts explored or known upwards from cave passages) have been climbed to well over 100m high to stop at blind domes. At many sites, the traditional concept of their development by vertically falling water is inapplicable. In these cases, it would appear that a more likely explanation is rock collapse initiated at the base of the shaft and then working upwards by progressive stoping, matched by erosional removal of the breakdown debris at floor level.

Roof profiles of cave chambers show considerable variation. Only some have the conventional dome profile that is created by tensile failure beneath a compression arch within the rock (Fig. 3). The roof of Sarawak Chamber (Fig. 1) is a complex structure that appears to include a number of stable arches. Most cave chambers are very significantly controlled by structural weaknesses in the limestone, notably faults or major joints. Where solutional enlargement of these fractures creates open fissures, and where a number of fissure sets or zones intersect, a significant weak zone is created within the limestone. Removal of material from the base of this, where it is cut by an active cave passage, may be followed by progressive upward failure. The previously weakened material drops down to leave a vertical shaft, which may be narrow and is excavated totally from the bottom. Some of these shafts continue upwards through to the surface to form sky-holes, and these may then be further developed by surface water. 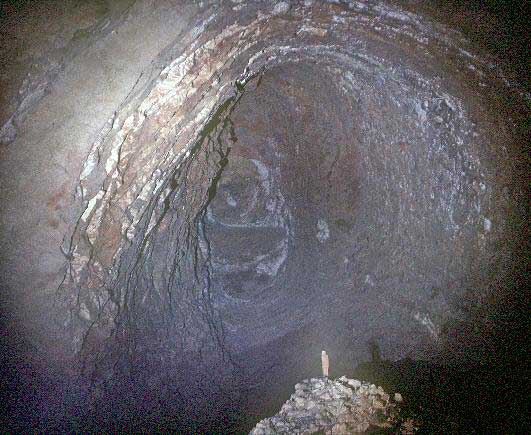 Fig. 3. A high chamber with a domed roof in a cave south of Xinlong, Chongqing, China.

There are many examples of tall blind chambers, although the structure may not be apparent when exploring upwards from the floor. Some comparatively small chambers have huge echoes from above, and some are very, very high. A large unclimbed and echoing aven in Prediction Cave, in the Mulu karst, appears to be over 100 m high, but could relate to unknown passages at a higher level. Titan Shaft lies on a fracture zone in Peak Cavern, Derbyshire, and has been climbed to a height of 150 m, where there does not appear to be any significant inlet passage.

A huge vertical range of phreatic features is conspicuous in some caves. At some sites in southeastern Asia, there are three-dimensional, phreatic mazes of tubular passages each of which is 20 to 50 m in diameter. In the Mulu karst, most of Cobweb Cave consists of perfectly circular passages of huge dimensions that form a very complex 3-D maze. Similar phreatic passages in the upper parts of the nearby Clearwater Cave have been breached by the lowering ground surface to create large open collapse features (Fig. 4). Comparable passages have been found within the active phreas of the Tisu catchment, in Guangxi, China. There, divers have entered huge cave passages where the roof is 50 m below the surface of the water and the floor at least 50 m lower. Further exploration of these remains a daunting task. 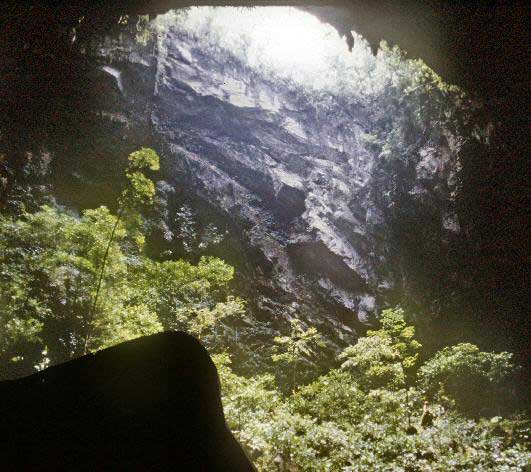 Fig. 4. The collapsed chamber of RMAF Hole, a tiankeng formed in the old high-level phreatic passages of Clearwater Cave in the Mulu karst in Sarawak.

In conclusion, it does appear that the mechanism for the formation of some steep or vertical blind avens may involve collapse in and around local zones of rock fractures, which may have developed within a very deep phreas at some sites. This may then represent an alternative process whereby tiankeng development is initiated, in contrast to the vadose development that is considered responsible for the typical tiankengs. As cave exploration techniques improve into the future, more blind avens will be climbed and deeper phreatic passages will be explored. It will be fascinating to watch as the story unfolds.