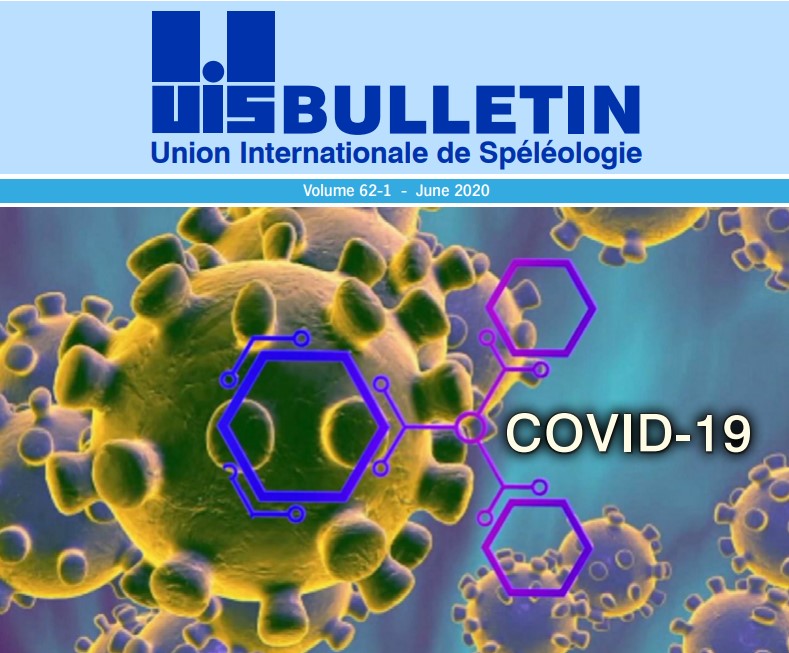 18th International Congress of Speleology is not just about caves, it is also a great fun! The entertainment program will be fabulous!

Conferences postponed due to Covid-19 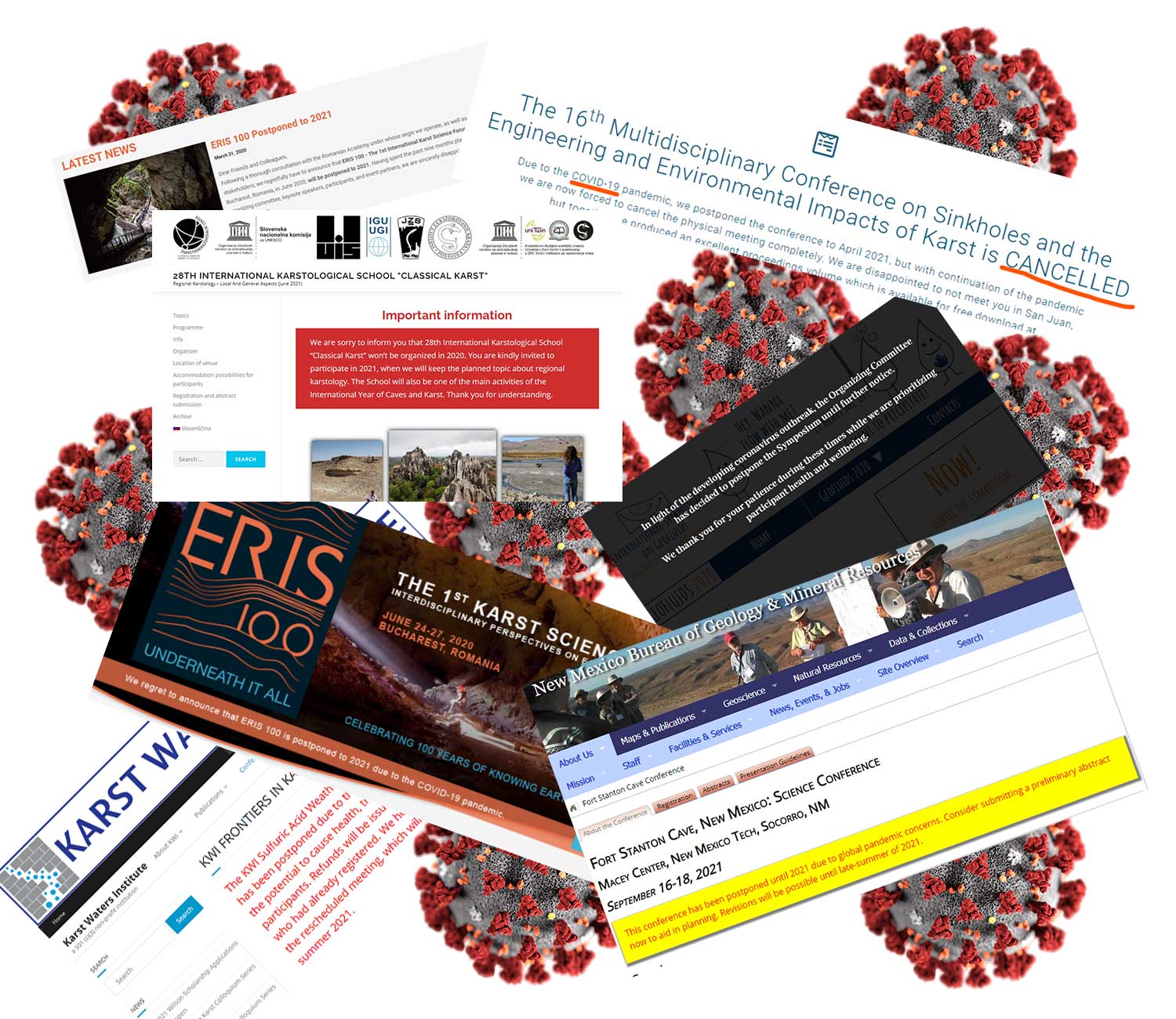 As COVID-19 grip tightens around the globe it is becoming more and more difficult to conduct traditional caving activities. One after another conference, symposiums and meeting are being cancelled or postponed to 2021 without definitive dates. Below is the list of Karst and Cave - related meetings that has been postponed:

List of excursions during 18th International Congress of Speleology in France

There will be many fantastic excursions. Hurry up to book your ticket! Follow this link to book.

Beautiful area in Southern Jura. This is an outstanding caving attraction. There are two famous tourist caves. The Saint-Julien cave has been available for public since 1930s. Temperature inside is between 0 and 14 °. The cave of Labalme was visited by King François. There is a siphon that was once a cave diving record. More info on this website. 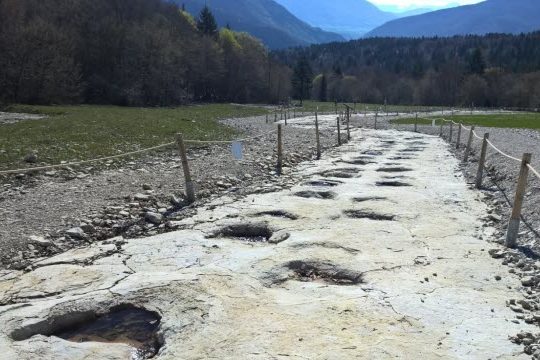 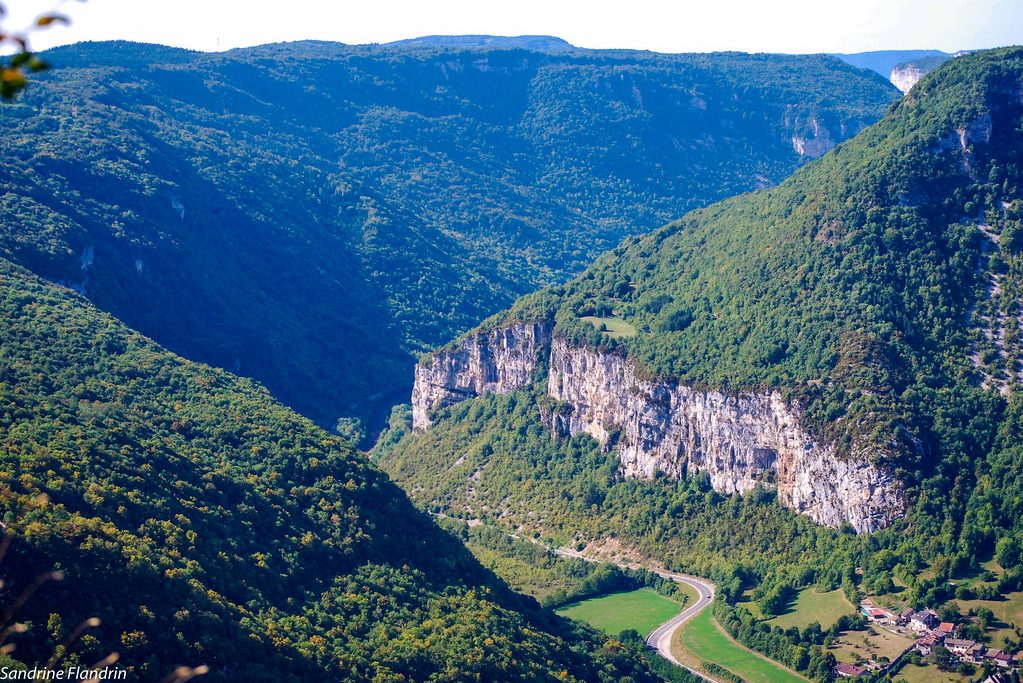 La Cluse des Hôpitaux: a beautiful canyon of 400 m deep with a variety of archaeological and speleological hotspots.

4. Caves of Soyons (village and castle of Crussol) 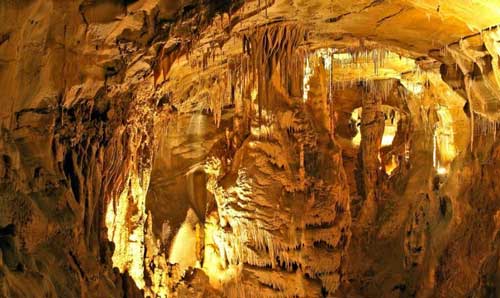 Immerse yourself in this prehistory since neanderthals used to live in these caves over 100,000 years ago till the middle age. This site has a huge archaeological importance. There are two different limestone caves with large network of underground galleries connecting various chambers. One of them is the famous Trou du Renard (foxhole). There are many prehistoric wall paintings, some of which are quite impressive.

The Château de Crussol is a 12th century limestone castle in the commune of Saint-Péray that rises above the valley of Rhône and overlooks its famous vineyards. 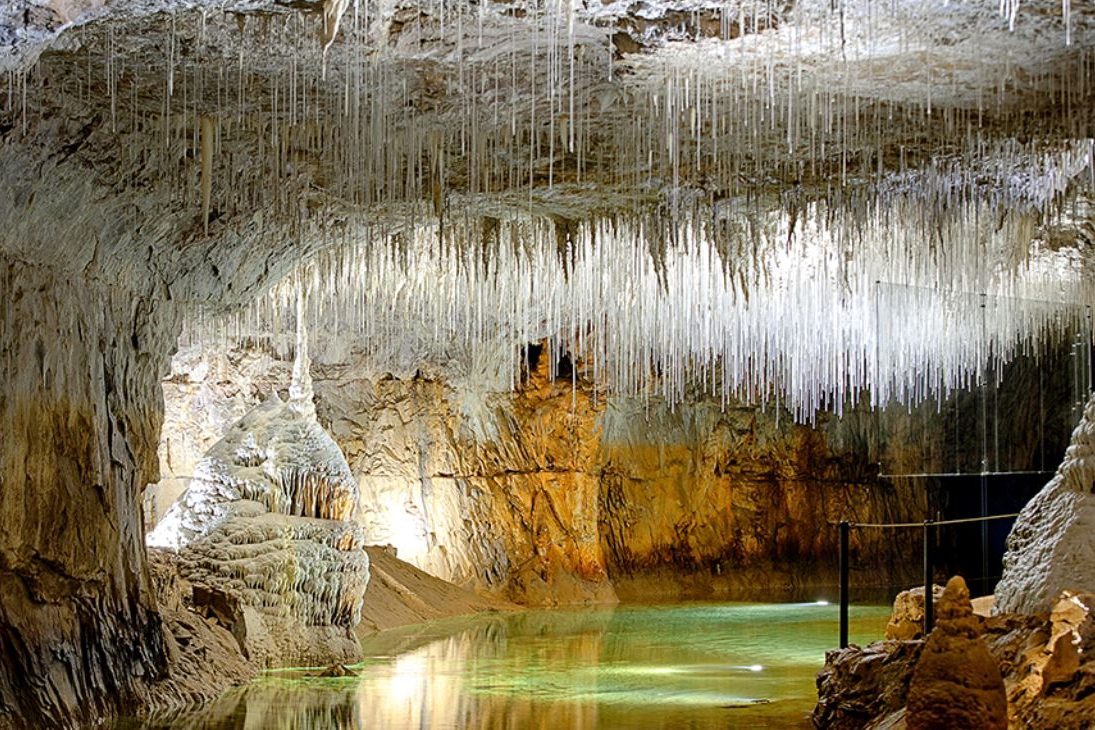 The caves of Choranche, wonder of the Vercors with its new facilities + visit to the Vercors plateau (part of the Coufin-Chevaline network, near the Gournier cave). 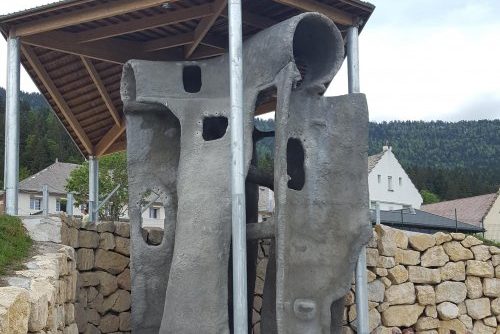 The caves of Choranche, marvel of the Vercors with its new developments.

The artificial caving structure located in Méaudre sur le Vercors was created on the initiative of the French Federation of Speleology under the leadership of José Mulot. It was inaugurated in 2018. 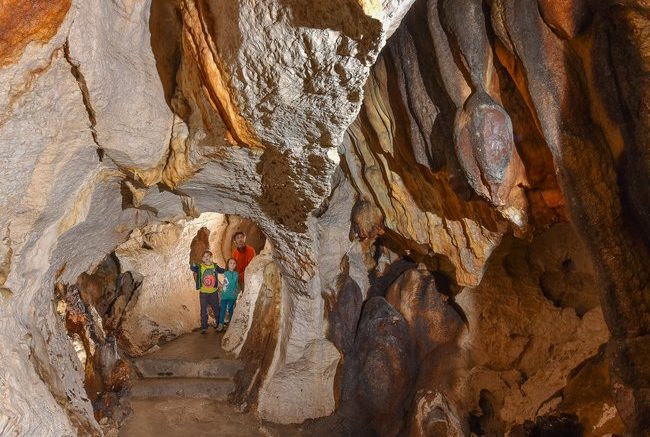 The Thaïs caves are famous for their Prehistory, their siphon, in the picturesque setting of the Bourne gorges, at the foot of the Vercors. 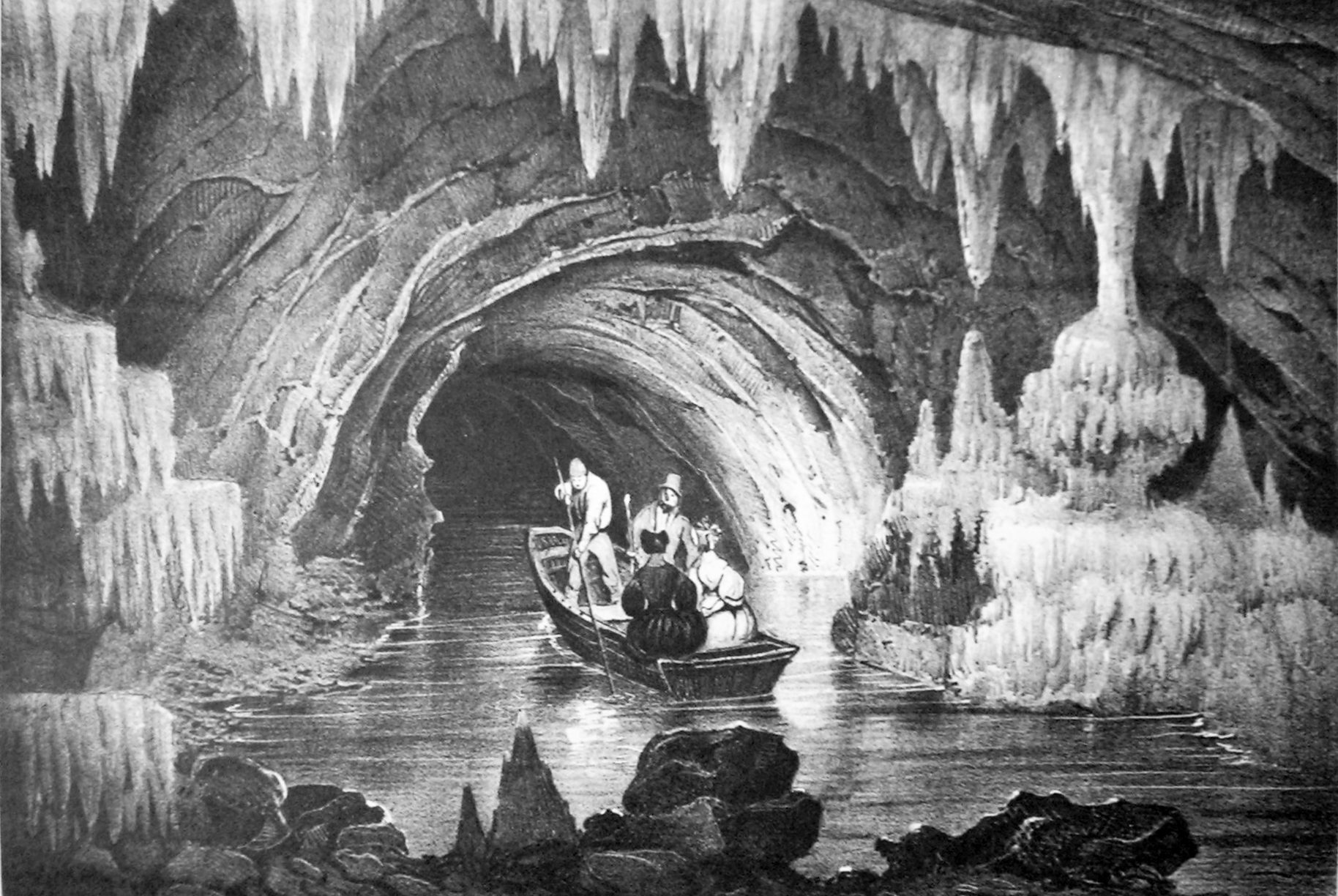 The cave of Labalme visited by King François 1st is a marvel of the Dauphiné. Its siphon was once a record for underground diving. 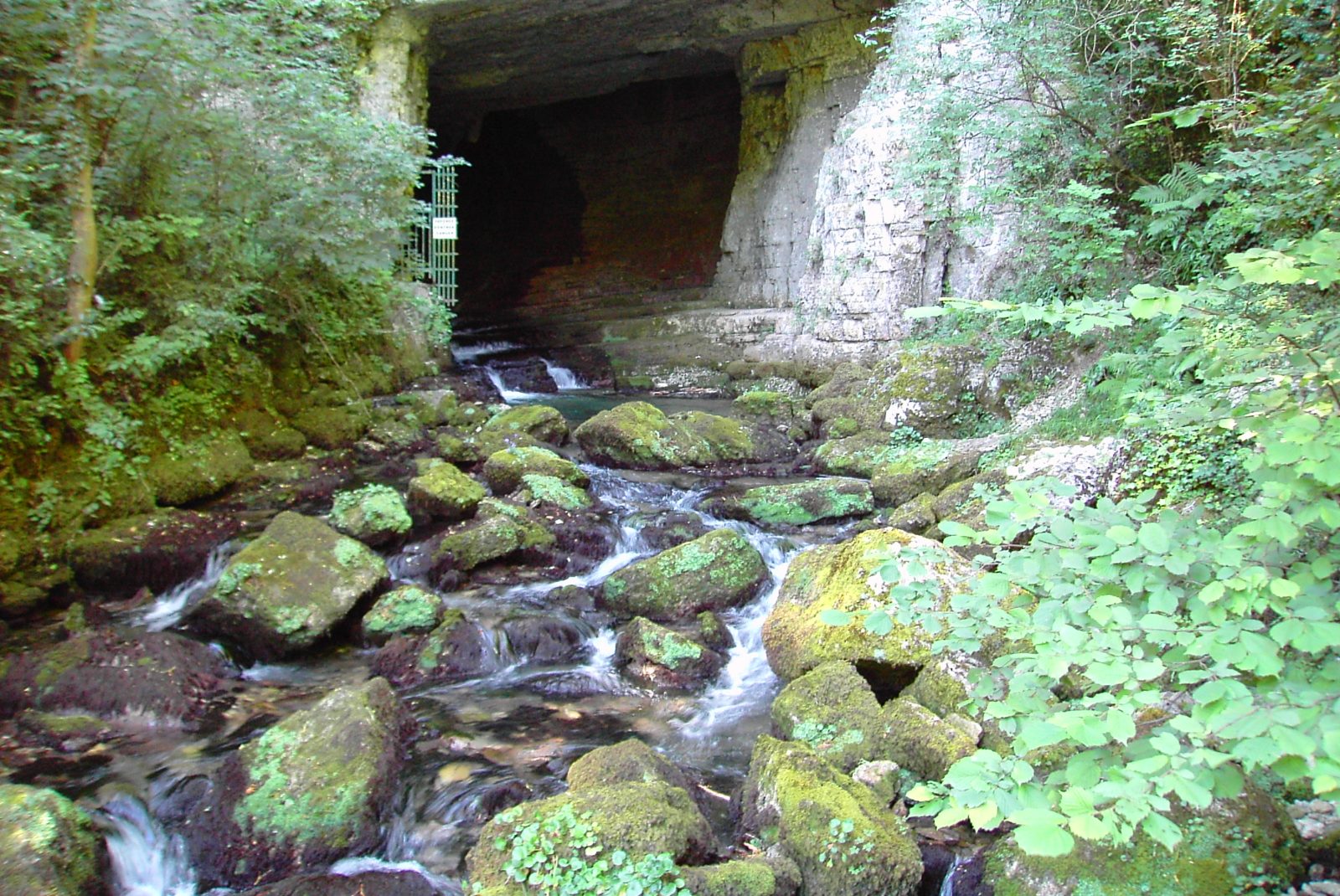 The Cuves de Sassenage, at the bow of the northern Vercors, constitute the exsurgence of the waters of the Gouffre Berger (- 1271m). They offer a tourist route with aesthetic forms of erosion. The visit of the limestone plateau of Vercors with gorges. 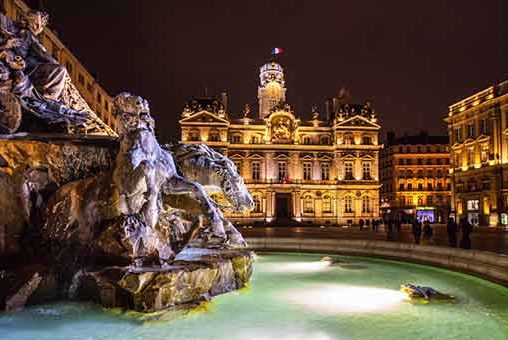 Lyon: trip to Lyon. Visit of Old Lyon (UNESCO Heritage), traditional meal at the famous Brasserie Georges and visit to the Confluence museum 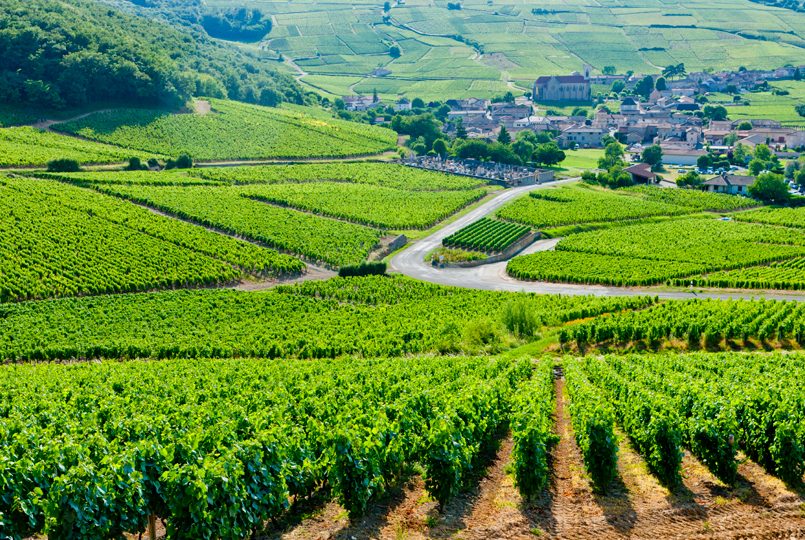 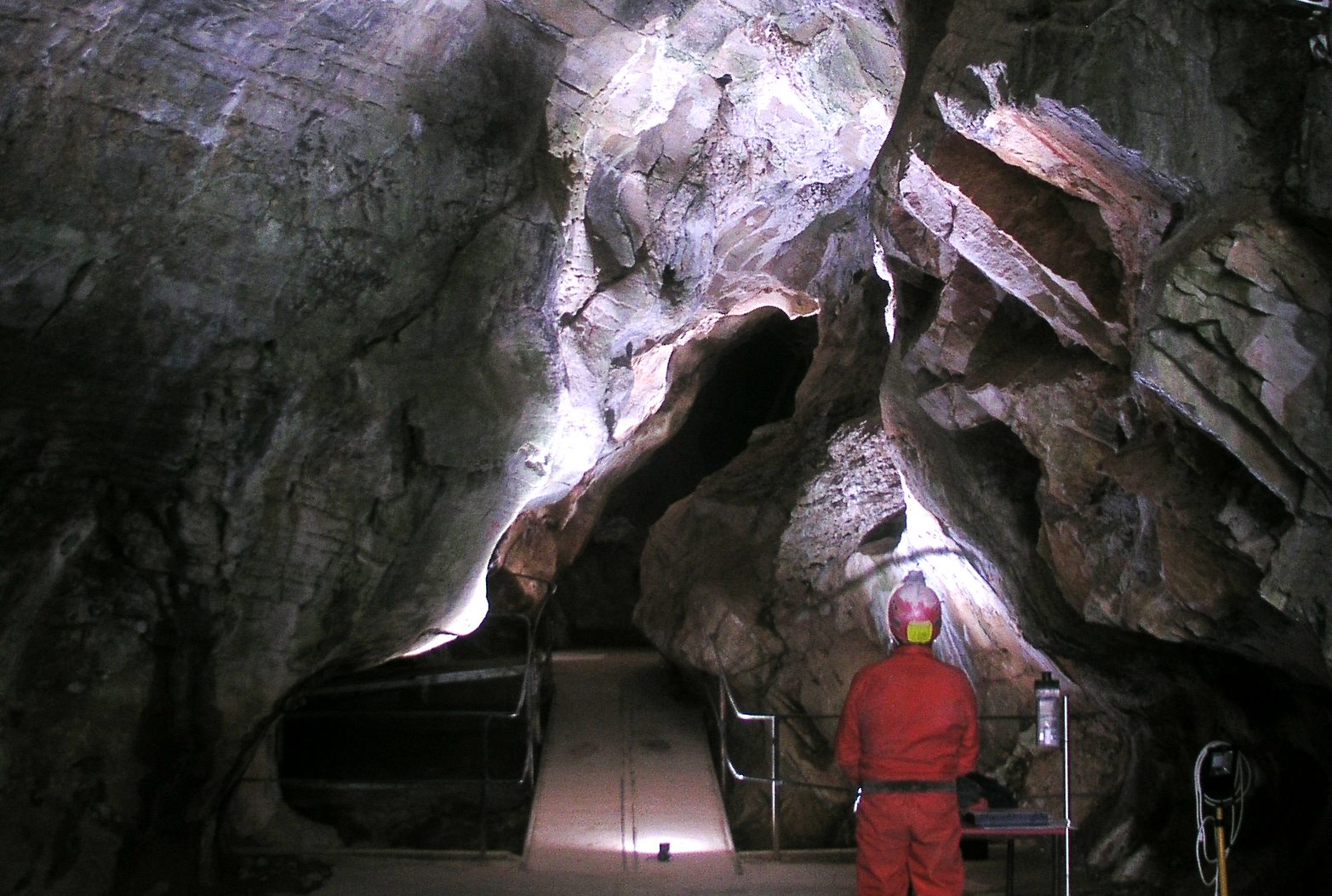 The caves of Azé and Blanot belong to the karsts explored from the 18thth century in the Monts du Maconnais wine region. In Azé, the explorations continue in the prehistoric cave. The Museum of the eponymous site of Solutré-Pouilly is in the middle of the vineyards and offers a panorama of its famous rock. 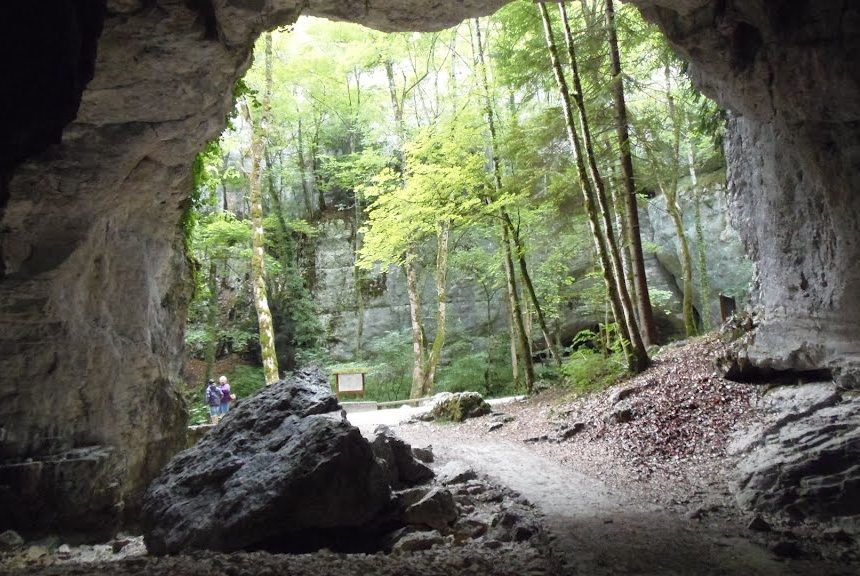 The Echelles cave is located in Chartreuse, not far from the Congress. It offers several sites and underground canyon near the Sardinian way and its monument, recalling the possession of Savoies by the kingdom of Sardinia (attachment to France in 1860; Napoleon 1st will have it replaced by a tunnel in 1804) + visit St Hugues chapel at St Pierre Chartreuse.

14. Grottes des Echelles (Chartreuse) + Museum of the Bear in Entremont-le-Vieux 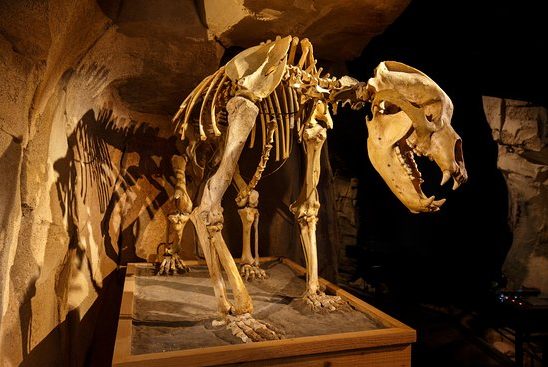 The Bear Museum in Entremont-le-Vieux takes us to the distant ages of the Massif du Granier which has a karst network of more than 50 km where the Balme in Collomb served as a hibernation place for thousands of bears caves from - 45,000 years old.

15. Speleological excursion in the Prérouge cave and the water supply basin in the Bauges. 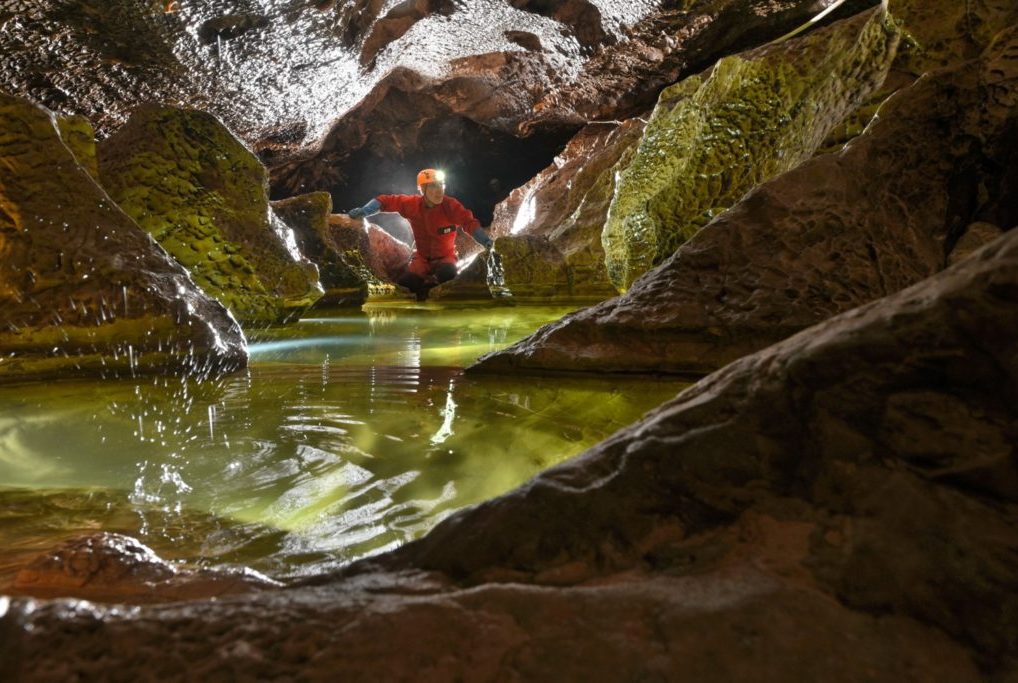 The Pré-Rouge cave and the Bange cave belong to the Massif des Bauges. In these mountains, systems of more than 50 km have been dug and constitute a unique heritage.

Pré-Rouge: quite physical but horizontal speleological activity. Bange: fairly easy underground hike. Above, the Montagny plateau drains water towards the temporary resurgence of Pré-Rouge which feeds the Chéran canyon within the Regional Natural Park. 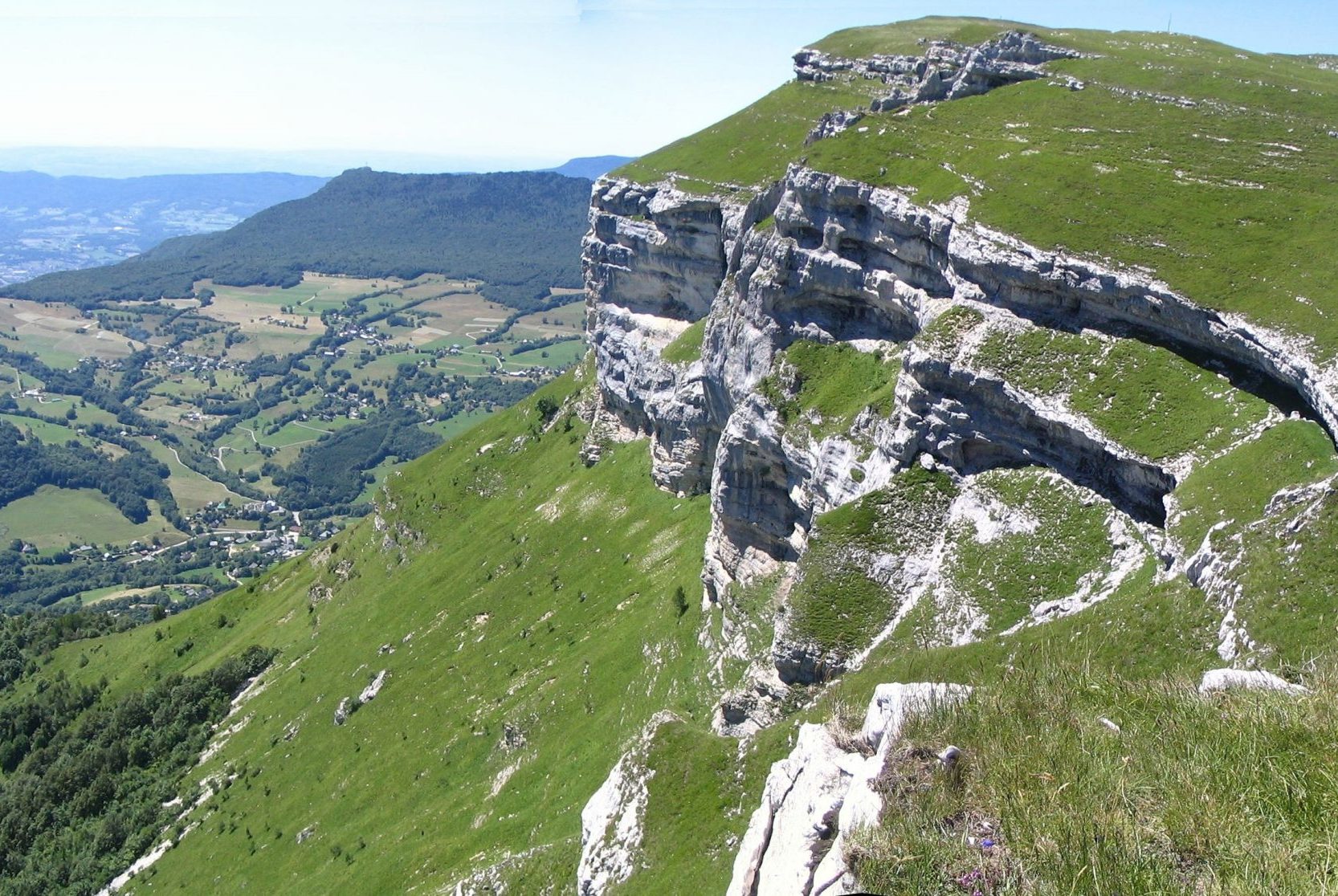 The karst path from Margeriaz to Aillon-le-Jeune allows you to discover the Massif des Bauges and its typical landscapes with views of the internal Alps. From 2 to 4 hours of hiking up to 1600 m altitude with marked route.

Suspended path of the Sierroz Gorges. Spectacular canyon course near the congress site. 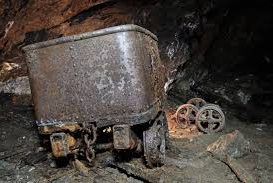 19. Circus of Saint-Even and visit to the source of Guiers Vif + museum of the Bear 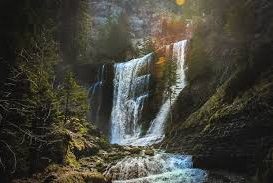 Circus of St Even in Chartreuse. Visit of the sources of Guiers Vivid. At the bottom of the circus, approach these emblematic karst sites alongside systems of more than 70 km. Simple underground visit possible.

Discovery of this massif, the main outlet of the system and the history of the explorations of a 45 km network for 720 m of vertical drop. 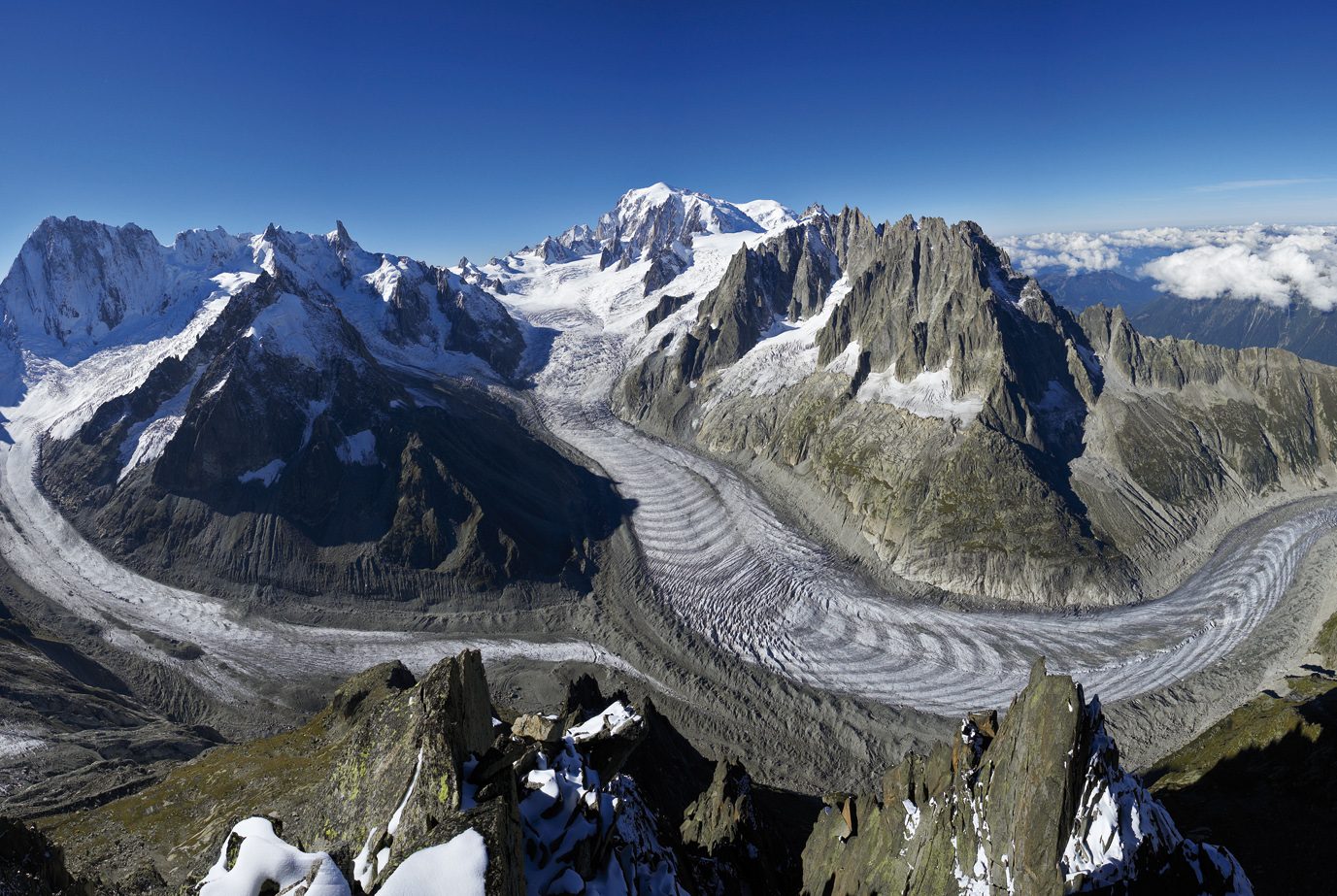 The following text is wholy or partially republished from the original source.

Dear Friends, As you are no doubt aware, the COVID-19 virus is spreading around the world. Increasing numbers of restrictions are being placed on travel by governments, employers, and industry to reduce the spread of the virus. As a result, it is not possible to conduct the 16th Multidisciplinary Conference on Sinkholes and the Engineering and Environmental Impacts of Karst (more commonly called The Sinkhole Conference) as originally planned for next month from 20-24 April 2020 in San Juan, Puerto Rico. However, we have arranged with our partners and hotel to reschedule it for 12-16 April 2021.

We have selected April 2021 as the most assured date when the conference can be held with minimal health risks associated with the COVID-19 virus, while meeting our logistical obligations to our participants and partners. This later date also avoids conflict with other conferences scheduled at the end of this year that many of you are already planning to attend.

Here are the most important things you need to know about this change:

On behalf of everyone on the 16th Sinkhole Conference Organizing Committee, we are sensitive to the extraordinary circumstances posed worldwide by the spread of the COVID-19 virus. We hope you and you loved ones are well. We made these adjustments to the Sinkhole Conference to maximize protection of your health and ability to attend, enjoy, and benefit from this great meeting, with excellent colleagues, amid the spectacular karst of Puerto Rico. We appreciate your understanding as we strive to overcome this challenge. For more information and to register, go to www.sinkholeconference.com.